Over on G+, I had some suggestions about alternatives to my ideas in  Combining Dungeon World attribute checks with LotFP skills, badly. I’ve replied here so that I can use table formatting.

Stuart Pate — each skill point give a re-roll, pick highest

Taking my cue from https://forum.rpg.net/showthread.php?744161-2d6-advantage-amp-disadvantage, Anydice can calculate the effects for us — http://anydice.com/program/c763

The “Skill 0” row is of course the normal DW roll.

Average attribute mod in my game is currently +0.33 (modifiers sum to +2 over the six attributes), but under my planned revision that may increase to +0.8. Let’s assume that people with skills will usually have a +1 in the relevant attribute, and that there are no other modifiers — http://anydice.com/program/c760

Not obvious to me how I’d model this in AnyDice. Probably possible, but I’d have to put some time in to find out.

Davide Pignedoli idea 1 — thieves get one skill per level, skills give you 3d6-keep-best

I don’t know an efficient way to generate the tables I was using earlier, but if we set Graph and At Most in Anydice we get the following plot (truncated at 12 for comparability with others): 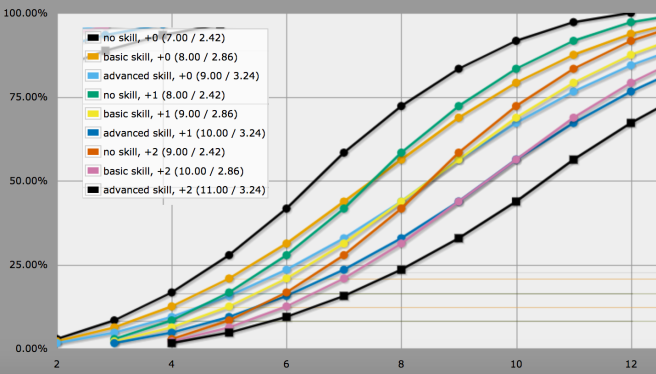 Any of the above with a per-session (or similar) limit

Most obvious unit for Immergleich would be per day, or per uptime. Latter has been almost synonymous with “session” since I introduce the uptime/downtime cycle, but that’s not a given.

(IIRC there was a mid-session downtime in session 26, although that session was notable in that (a) it was 4.5 hours long, rather than our more normal 2.5–3 and (b) had rolled on from the previous session without a proper downtime, because the PCs were all imprisoned).

Aesthetically, I’d like to avoid this, unless there is an in-game rationale for the limit. But I’m not wedded to that, as I have several similar mechanics already.

Calculating the stats requires an estimate of chances to use this per day/uptime. I have no data. Could guess.

View all posts by robdalexander