How much freedom you had over the major events in my various games? Did you feel you were steering, or that I was? Was it like a quad bike or like a rollercoaster? Like being a writer, or like being a reader?

Crucially, I want to know “Did it feel like you could change the major outcomes of the story being told?”

I asked them for a 1–5 rating of each game, against the following anchor points:

1 — Total railroad — you had to just follow the path I set for you — I told a story and you acted your parts.

5 — Complete freedom — not just “well, you can _try_ anything”, but “I could try anything plausible and there’s some chance that it will work out and change the outcome of the story”. 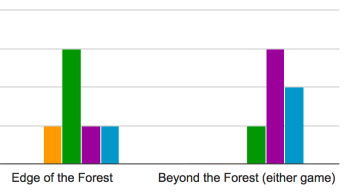 I already knew that Scum & Villainy was the least-liked game overall, so I’m not surprised to see it do worst here. Could be a negative halo effect tho — people remembered not liking the game, so when as “did you have the freedom you wanted” gravitated towards the negative pole.

I’m interested to see that Edge of the Forest felt less open than Immergleich… I’ll need to discuss that with players to sound out why.

I’m not surprised that Beyond the Forest did best of all, as we used to Burning Wheel -style Belief mechanics, which both (a) let players flag up to me what they wanted to do and (b) signalled that I was serious about enabling that.

View all posts by robdalexander

One thought on “Freedom to choose your path — player survey”